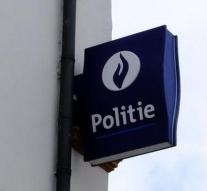 brussels - The Belgian public prosecutor holds two of the four suspects who were arrested Tuesday at 15 raids in include Ghent and Antwerp remand. That left the federal prosecutor Wednesday.

The pair would have financed a terrorist group and Syriëstrijders for IS recruited. One of them is the brother of Hicham Chaïb, the former right hand of Sharia4Belgium leader Fouad Belkacem. A sister Chaïb and a fourth defendant were released under certain conditions.

Chaïb left in 2013 to Syria to join terrorist organization Islamic State. The Antwerp would have already worked in Raqqa head of the religious police. Chaïb also appeared on a video shortly after the attacks in Brussels in March, in which he glorified the attacks and then a man shot in the head.

In the searched houses no weapons or explosives were found. The prosecution sees no connection with the attacks of 22 March in Brussels.