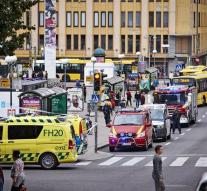 helsinki - The Finnish police released two men arrested after the deadly sting in Turku. They are nowhere to be suspected of anymore. In the meantime, two other suspects are being arrested.

The chief verdict would have used a false identity in Finland when he entered the country last year and applied for asylum. The Moroccan would have stopped in Germany earlier. Meanwhile, with the help of the German authorities, the true identity of the man is outdated. He turned out to be no eighteen, but 22 years old.

The man earlier acknowledged that he was responsible for the attack, with two passersby killed and eight people injured. He denied, however, had a terrorist motive.