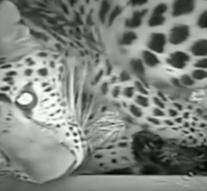 leicestershire - In a zoo two Amur leopards are born in the British Leicestershire. A camera recorded the birth of the rare animals.

The cubs, which have not yet been named, are doing well, a spokesman for Twycross Zoo reports BBC.

In the wild is estimated that only 70 Amur leopards. The zoo works since last year, together with multiple organizations on a plan to reintroduce the animal in the wild.