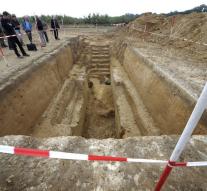 bannewitz - Archaeologists have discovered during excavations in the German city of Dresden two prehistoric settlements . One of the settlements dating from the Neolithic period , around 2500 BC . The other comes from the Bronze Age and is about 1500 years younger. Has announced that the Saxon archeology office Monday .

During excavations in Bannewitz archaeologists found pits and round, sunken granaries. The discovery fills experts say the gap that has existed in our knowledge about the population in prehistoric times. They now hope to find out more about the time the area became populated and how lived the prehistoric community.

Archaeologists Since August research in the area of 3.8 hectares along a provincial road. In November, the excavations have to be ready.