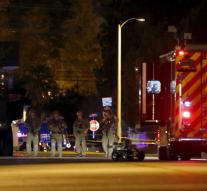 - Two perpetrators of the shooting have been slain in the Californian city of San Bernardino. It's about a man and a woman sitting in the suspected getaway car of the gunmen. The black SUV was previously surrounded by a special SWAT team (SWAT team). For a third perpetrator is still being sought.

The police chief of the American city could even say anything about the identity of the perpetrators. US media, however, mention the name of Syed Farook as a possible suspect. Another suspect would be his brother. Nothing is known about the woman.

The FBI is currently investigating at the home of one of the gunmen. Local residents are urged to stay indoors and keep windows and doors closed. In addition, a person arrested. It is not known whether the suspect was involved in the shooting in the Inland Regional Center. This building, which offers 550 personnel assisting mentally disabled, is still being examined for the presence of explosives. The getaway car was subjected to a thorough examination. No explosives were found in the car.

Authorities are not yet behind the motive of the act. It is not known whether it is terrorism. However, the gunmen were well prepared. Governor Jerry Brown of the US state of California said that " California will do everything possible to bring the perpetrators to justice ".

When the shooting fourteen people were slain in the Inland Regional Center. The number of injured has risen to eighteen. Police also counts as a police officer to who was injured during a confrontation between the police and the two perpetrators in the car. The SUV was heavily damaged. The windows were shot out. At the moment the shooting started, there was a big party going on in the Inland Regional Center.