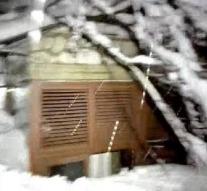 farindola - Rescuers have saved two people at the Italian hotel Wednesday was buried under an avalanche. The two sat outside the hotel in a car.

It's about the two people who were in contact with the authorities. They said there were at least three people were buried by the avalanche.

According to Italian media there are possibly still 27 people trapped in the basement of the partially destroyed building. There may be injuries and even deaths, according to the president of the Province of Pescara, Antonio Di Marco. On that nothing has been confirmed.

The hotel Rigopiano near the place Farindola was after the earthquake Wednesday buried under an avalanche. Beware Thursday morning at four o'clock the first rescuers reached the remote area. It is she not managed to enter the hotel. The part that is still standing buried under the snow.

The building stands on the eastern side of the Gran Sasso d'Italia (translation: big stone from Italy).\n  \n  \n   advertisement

Central Italy is plagued by snow and earthquakes. At least one person was killed Wednesday morning. Schools were evacuated and shut down train traffic.

The many earthquakes, including three with a magnitude above 5 on the Richter scale occurred in the region in recent years been hit by a series of deadly earthquakes. The middle of Italy is also plagued by snowfall at this time.