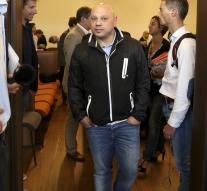 According to the Flemish media involves two Eastern Europeans, possibly of Albanian descent. The parquet floor of Limburg investigating the murder, did not comment on the arrest.

Silvio Aquino was on August 27 together with his wife Silvia Liskova (43) by two cars run off the road on a deserted forest road in Opglabbeek, north of Genk in the Belgian province of Limburg. In addition, shots were fired at the criminal. According to his lawyer Sven Mary, there is no question of a liquidation, but his client with a runaway attempt died kidnapping.