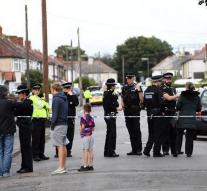 london - Due to the bombing in the London subway, two arrests were held again on Wednesday morning. In total, five suspects have now been arrested. In Newport, police captured men aged 48 and 30 after an invasion of a home. In the same city in Wales, someone was arrested on Tuesday evenings.

At London's Parsons Green station, a homemade bomb in a train station exploded on Friday. Although the terrorist act failed half, thirty travelers became injured.