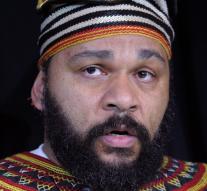 - The French comedian Dieudonne was Wednesday sentenced to two months in prison and a fine of 9000 euros.

The court in Liège rebuked him for discriminatory and anti- Semitic remarks during an appearance in Herstal (Liège) in March 2012 and for inciting hatred. The Public Prosecutor had demanded a half cell.

The comedian has to let publish the verdict in the French newspapers La Libre Belgique and Le Soir. He was last month, attended the trial and also not with the ruling.

Dieudonné is known as an anti-Semite and convicted many times in France.