Home / World / Two killed by avalanches in the Alps 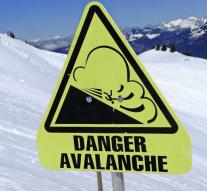 wallis/clochers d \u0026 # x27; arpettes - Two people were killed this weekend by avalanches in Switzerland and Austria.

In the Swiss canton of Wallis, four people were dragged by an avalanche. A Swiss skier died under the one and a half meter thick layer of snow. Two companions were not injured and were able to free a third person from the snow. He was taken to a hospital injured.