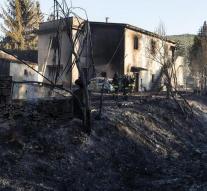 rome - Natural fires are keeping Italy in control. Two deadly victims were reported on Monday. Firemen found, according to press agency Ansa, in extinction near Tivoli, not far from Rome, the bodies of two older women. The small house in which they stayed was enclosed by the fire. A third person was brought to a hospital in shock and with a poison poisoning.

Italy has been tormented for a fortnight by burning. In many parts of the country it has not been raining for a long time and the woods, shrub and grassland are cork-dry. Only in Sicily, the fire brigade broke out 299 times Monday, told the commander via Twitter. Also in the provinces of Lazio, Calabria, Apulia and Campania, the rescue services made overtime hours.