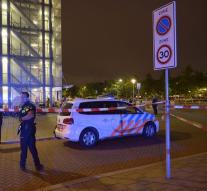 zaandam - In a possible shooting at the Perim in Zaandam, two people were injured on Tuesday evening. A quarrel between four to five people would have escalated. The injured persons were taken to the hospital.

Just before 23.00 hours the police quit because of a conflict in a flat. Witnesses reported to NH News that they were heard shots.

The police have started an investigation and can not confirm whether they were shot. However, more people would have been arrested.