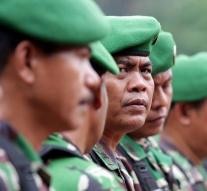 jakarta - About two hundred prisoners in Indonesia escaped from a crowded prison on the island of Sumatra on Friday. They were able to open a gate of the prison complex near a mosque where they could pray.

The detainees had complained about their treatment in Pekanbaru prison in the province of Riau and accused some of its guards of being violent, according to the head of the regional office of the Ministry of Justice. 'This caused the incident at the Friday prayer,' he told a local television station.

According to a police spokesman, 77 of the escaped prisoners were arrested. The cell complex has capacity for up to seven hundred prisoners, but there were about 1800 locked up at the time of escape.