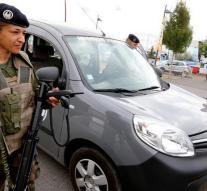 - Two Frenchmen were arrested Friday are Wednesday accused of terrorism. It is a thirty-year man from Dole and a 39-year-old from Roanne. They are accused of conspiring ' with a view to a terrorist enterprise '', reported prosecutor in Paris.

Both are acquaintances of the French left in 2012 to Syria jihadist Rachid Kassim (29). Kassim is seen as an important source of inspiration for perpetrators of recent attacks in France. The two remained in contact with Kassim, after it was moved to the Syria of the Sunni extremists of the Islamic State.

Kassim would be encouraged directly or indirectly, to more or less improvised attacks such as the murder in June on a policeman and his girlfriend in a village approximately 40 kilometers west of Paris and the murder in July on a priest at Rouen.