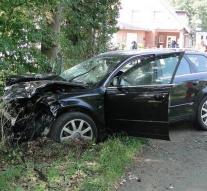 itterbeck - In an accident in the German city of Itterbeck, two Dutch vehicles have collided. The three women in an Audi and the two men in a Mercedes have been injured. They have been transported to Dutch hospitals.

That confirms the German police to local media. The accident happened at a crossing in Itterbeck, 10 kilometers across the Dutch border at Venebrugge and Hardenberg.

According to gn-online. They left the driver of a Mercedes the L43 and seems to overlook the Audi with the three Dutch women over there. The driver could not brake on time and the vehicles collided with each other.

There was a file for Itterbeck after the accident due to the temporary closure of the L43 (Hardenberg- Itterbeck).