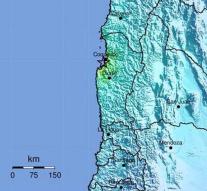 santiago - In case of a major earthquake off the west coast of Chile, two people were killed, reports the Chilean earthquake service. The epicenter of the quake of 6.7 was according to the American seismological...

The two people died according to local media from a heart attack during the quake. In the Coquimbo area there were at least 200,000 people without electricity. The electricity company of Chile said that the power supply was restored on Sunday morning.

According to the earthquake service, there was no danger of a tsunami after the quake