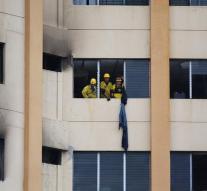 Local media video footage showed that someone from the nine story building jumped down and hit a lower roof. According to emergency workers, he was hospitalized in critical condition.

Several people were jumped out of the fifth or sixth floor and injured. The fire probably appeared on the fifth floor.

About fifty people were evacuated from the ministry. Several people had to be treated at the hospital for burns and smoke poisoning.