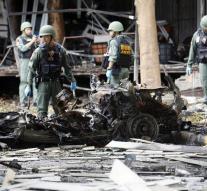 bangkok - In southern Thailand on Tuesday sounded again bombs. It is one person killed and were about thirty people injured, the police said. There are no tourists among the victims.

Two bombs exploded near a hotel in the coastal town of Pattani. The first bomb, which went off in a parking lot at the rear of the hotel, made no casualties. The second explosion came from a truck parked in front of the hotel entrance, announces a police officer.

Southern Thailand two weeks ago was rocked by a series of attacks in tourist resorts. Four Dutch thereby injured.