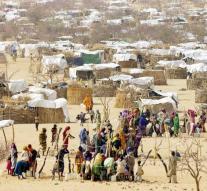 berlin - The international community wants to spend more than 1.7 billion euros extra for aid to the crisis area around Lake Chad. During a donor conference in Berlin, the needy population of one of the poorest regions in the world was pledged about three times as much as a year ago at a similar meeting in Oslo.

'That is even considerably more than we originally hoped for', said the German Foreign Affairs Minister, Heiko Maas. The government itself is contributing 130 million extra, 100 million for humanitarian aid and the remainder for political stabilization.

The water level of the large lake south of the Sahara has dropped dramatically due to climate change. As a result, a catastrophe is occurring in the surrounding parts of Cameroon, Chad, Niger and Nigeria. Apart from hunger and drought, the 50 million inhabitants are also threatened by the terror of Boko Haram and Islamic State. The result is a sustained flow of refugees towards Europe.

'Together we must ensure that the area does not become a hub for terrorism, crime and people smuggling,' according to Maas.