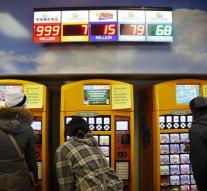 sacramento - 19-year-old Rosa Dominquez from the US state of California has won two major lottery prizes in a week time. First she won $ 555,555 with a $ 5 scratch card she bought at a gas station. A few days later, she fell again with a 5-dollar scratch card. The second time she won 100,000 dollars.

In total, she gets 655. 555 euros deposited on her account, which has been converted to 574. 871.75 euros. According to the California Lottery, Rosa has already received the money and plans to buy a new car and go shopping extensively.