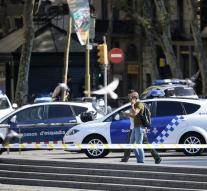 - Two armed men entered a restaurant just after the attack on Barcelona's Ramblas.

That reports local media. It is unclear whether they hold or hosted people there. The Spanish Prime Minister is now talking about an attack.

The police urges people not to come to the place of the incident to give the emergency services space. Public transport is also closed.