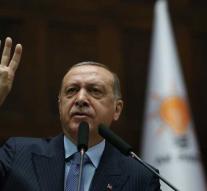 The Twitterstorm started after Erdogan promised in the Turkish parliament that he will step up as soon as the people have 'enough' of him. Erdogan, now in power for 15 years, saw that the party leaders of the divided opposition also supported the sentiment of 'enough enough'.