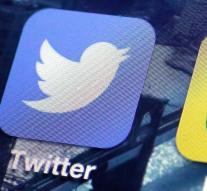 - Twitter has iOS users the option to train the newly introduced quality filter. Who uses the filter itself can now mark tweets as 'undesirable'. Twitter uses that information again in order to make it work better filter quality.

Who opens a tweet on an iOS device, may indicate the context menu 'I think this Tweet dislikes. The tweet therefore disappear immediately from your Twitter timeline and processes the information behind the scenes in the algorithm of the quality filter. The new train function is enabled on the server of Twitter, the app does not need to be updated.

Twitter recently launched a quality filter to help provide a more meaningful timeline. Tweets of interest to the user are displayed higher in the timeline. Those who prefer to see all the tweets from all the Twitter users followed the filter to expand.