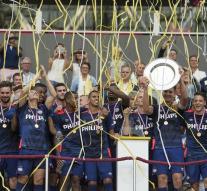 amsterdam - Since the football season in the Netherlands is about to begin, Twitter comes with two emoji: one for the Johan Cruijff Shield and one for the Eredivisie.

PSV champion and cup winner Feyenoord play Sunday in Amsterdam for the Johan Cruijff Shield. That is, the opening of the season. Who this weekend used the hashtags #JCSchaal or #FeyPSV, get back there to see the scale. On the scale, shirt number 14 of Johan Cruyff. '' This is the first edition after the death of Johan Cruyff. That is why we, in cooperation with Twitter have developed a special Johan Cruijff emoji '' said Bram Euser of the KNVB.

A week later, NEC and PEC play the first game of the Eredivisie season. Who uses the hashtag #Eredivisie during that weekend, sees a golden laurel wreath with the number 60. Sixty years ago, began the Eredivisie.