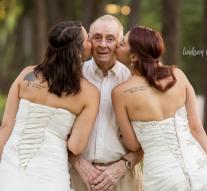 texas - The Texan twin sisters Sarah and Becca Duncan put a beautiful photo shoot scene for their demented father, because he probably can not witness their actual wedding.

Although both sisters are not engaged, they wanted the wonderful moment with their father immortalized when it was still possible. In 2012 was diagnosed with Alzheimer's Scott Duncan (80). It's getting worse with his health and he was recently transferred to a nursing home with 24-hour care.

'Sarah and I know that our father probably never experience our wedding- not that we give up hope, but we are just realistic- so we decided to make these wedding photos with porridge,' Becca said opposite ABC News.


The photo shoot took just ten minutes to complete, but the experience was 'the best ever', according to Becca. 'You could see him beaming,' Sarah adds.


Sarah and Becca's mother helped with the makeup and arranged a photographer who free them gave way to the photos. Thanks to friends and family they could use two gorgeous wedding dresses and bouquets to the moving picture.