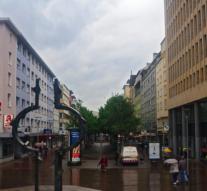 ludwigshafen - A according to the authorities' religiously radicalized 'boy of twelve tried to carry out an attack with a nail bomb the Christmas market in the German city of Ludwigshafen. It reports the magazine Focus on authoritative sources in the police and judiciary.

The boy would attempt to be stimulated by an 'unknown member' of the terrorist militia Islamic State. The failed attack on 26 November, that the inflammation of the bomb did not work.

The federal prosecutor in Karlsruhe, according to Focus in charge of the investigation. Friday the prosecutor did not respond yet.

How the boy wanted to commit the attack is unclear, but according to Focus a few days later he took off a backpack with unexploded bomb in a grove at the town hall of Ludwigshafen. A passerby found the backpack and alerted the police, and experts said defuse the bomb.

The boy was born in Ludwigshafen was already known to the authorities. He was placed in a home after he had tried last summer to travel to Syria to join IS.