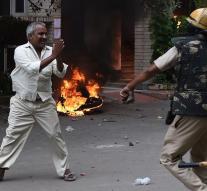 panchkula - In case of irregularities after a court ruling against an Indian guru, at least twelve people were killed on Friday.

About ninety people were injured in the violence. That broke out when Gurmeet Ram Rahim Singh was found guilty of the rape of two female followers in 2002.

More than one hundred thousand followers of the self-proclaimed saint and leader of the spiritual organization Dera Sacha Sauda had come to the North Indian city of Panchkula to attend the ruling. Video footage shows how robbers throw stones, burn fire and destroy satellite television sets.