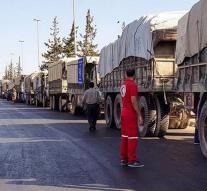 - "In a bombing raid on an aid convoy in Syria on Monday Twelve people were killed, including several aid workers from the aid organization Red Crescent and drivers of trucks with relief supplies. It reports the Syrian Observatory for Human Rights."

"Aid Convoys seized the truce in force in recent days to bring food to the public. The Syrian army, however, said the file on Monday and resumed the fight. The trucks carrying relief supplies were then attacked from the air near Aleppo. The trucks were hit by five rockets while they were parked on a site of an auxiliary center of the Red Crescent in Urm al-Kubra. Include the head of the center was killed. The convoy had flour and medical supplies for 78 000 people on board."