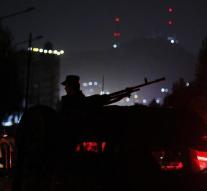 kabul - During the attack on an American university in Kabul Twelve people died. It announced on Thursday the police. Also, two offenders were slain.

The killed victims were seven students, three policemen and two security guards. In addition, 44 people were injured, of whom 35 students.

Wednesday presumably forced two gunmen complex of a university in which at that time more than seven hundred students attended. The attack was preceded by an explosion, followed by shots. After hours of special forces ended the attack.