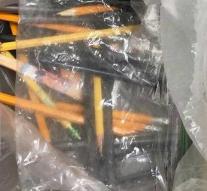 atlanta - Security personnel from an American prison was dumbfounded when it turned out that a transferred detainee had her vagina stuffed with escape material.

They are used to being in prison, but this hit everything. In the course of internal research by the Oconee County Sheriff's Office, it appeared that the woman was carrying dozens of pencils, seven tweezers and a lot of barrettes. Fortunately, wrapped in plastic.

The management of the prison suspects that the tweezers and barrettes were intended to open handcuffs.

The post of the police on their own Facebook page has been shared thousands of times. Respondents mainly break their heads over the many pencils. The police know the answer: they are used for tattoos and in some cases as a stabbing weapon.

There is also criticism among the respondents of the prison that they are publishing this news. The sheriff: 'Well, you can not make everyone happy'.