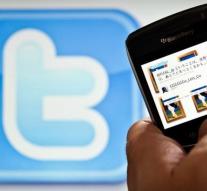 san francisco - Twitter, traditionally known for its 140-character message, is breaking this tradition. The maximum length is doubled to 280 characters. It starts with a small scale test, but it is meant that in a while anyone can make use of it.

According to Twitter, users have trouble losing their message in 140 characters. That leads to stuffing, or cramming, as Twitter calls it. Important words are deleted if twitters decide not to post their message.

That stuff happens according to Twitter to people who write in, for example, English, Dutch or Russian, where each letter costs one character. In Japanese, Chinese and Korean, one Twitter sign is identical to a syllable or even a whole word. These users even leave space in their tweet. In one of the eleven English-speaking tweets, the user needed all 140 characters, compared to only one in the 250 Japanese tweets.

'In countries where users can already lose their minds, they are often cheated on', says Twitter. Because Japanese, Korean and Chinese tweets do not have a space gap, they do not get the 280 characters.

The expansion must encourage users to put more on the platform. That can attract advertisers. Twitter is still growing, but investors are not fast enough. The medium has to do with fierce competition from newcomers like Snapchat and Instagram.

That Twitter always used a maximum of 140 characters is because the platform is based on SMS. Those messages can be up to 160 characters long. Twitter used 140 of them for the message and reserved the remaining twenty characters for the username.