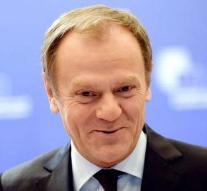 brussels - EU President Donald Tusk wants to have all spoken of the 27 political leaders before they meet next month in Bratislava. EU leaders consider on September 16 in the Slovak capital on the future of the EU without the UK and discuss possible reforms.

German Chancellor Angela Merkel will receive Tusk on August 18 for a working dinner at Schloss Meseberg, north of Berlin. Meetings with French and Lithuanian President are also planned, as well as the prime ministers of Spain, Luxembourg, Ireland, Latvia, Estonia, Sweden and Malta.

Tusk tries to go further along as many capitals. If no date can be pinned, consultation over the phone takes place.,, It is the beginning of a process '', the Thursday sounded in Brussels.


While British Prime Minister Theresa May is not welcome in Bratislava, Tusk travels well to London to talk to her about British intentions and its vision for the future relationship with the EU.