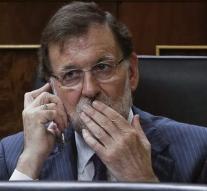 brussels - The Spanish government must avoid further escalation and the use of force in the conflict with Catalonia. EU President Donald Tusk called for Spanish Prime Minister Mariano Rajoy in a telephone conversation.

Tusk, the President of the European Council of Heads of Government, said he shared the 'constitutional arguments' of Rajoy. These argue that the referendum on Sunday's independence on Catalonia was illegal, as the Spanish court has also ruled, and that Catalonia can not divorce according to the constitution.

The European Commission called on the parties to talk "very soon" to each other and said that Rajoy could handle this "difficult process." Commission President Jean-Claude Juncker also had a telephone conversation with Rajoy. He listened in particular and repeated the committee's position, according to his spokesman.

For the international mediation proposed by Catalan Prime Minister Carles Puigdemont, seems to be still little animos. Several European parliamentarians, also from the Netherlands, believe that it has a role for the EU. The European Parliament is holding a debate on the issue on Wednesday at 3 pm, was decided on Monday. Vice-President Frans Timmermans spoke on behalf of the European Commission.

The discussion is about the constitutional state, constitution and fundamental rights in Spain in the light of the events in Catalonia. A proposal by the Green Group to deal with the "large-scale police violence against peaceful protesters" has not reached a majority.