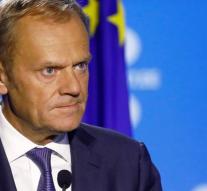 brussels - Catalan Prime Minister Carles Puigdemont should not announce a decision that would make a dialogue with Spain impossible. Donald Tusk, President of the European Council of Heads of Government, made a call on Tuesday in Brussels.

Puigdemont said earlier that he would call unilaterally the independence of Catalonia after the illegal referendum, where 90 percent voted for it. He holds a speech in the regional parliament on Tuesday evening. Perhaps he is arrested when he raises independence.