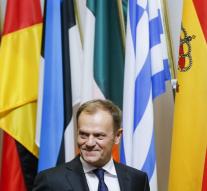 brussels - The European Union must do everything we can to keep the Schengen area of passport-free travel intact. This is only possible through good management of Europe 's external borders. That said EU Minister Donald Tusk Tuesday.

EU leaders held on November 9 meetings with African leaders in Malta on controlling migration wave. Tusk wants a subsequent informal meeting of EU heads of state on November 12 on the issue.

In his invitation letter to EU leaders Tusk wrote Tuesday that the situation regarding migrants is still very serious, now the stream in October reached a peak of 218 000 refugees who crossed the Mediterranean. " As I warned earlier, the only way not to dismantle Schengen is to ensure proper management of the external borders of the EU ", said Tusk.