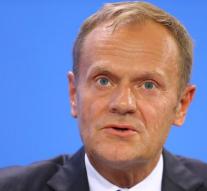 brussels/berlin - EU President Donald Tusk wants to put individual smugglers on an international sanctions list, for example from the United Nations. He wants to seize the G20 summit of government leaders next week to take this 'concrete measure' in the fight against organized trafficking in human beings.

For such a blacklist, UN Security Council approval is needed, Tusk said in Berlin after a preparatory meeting of European participants at the G20 in Hamburg on 7 and 8 July. There are also the leaders of the five permanent members of the Security Council at: USA, China, Russia, the United Kingdom and France.

The refugee issue is on the agenda of the G20. In the EU, the discussion about its approach has been re-inflated since Italy has threatened to stop letting rescue aid organizations rescue refugees in the Mediterranean. Prime Minister Paolo Gentiloni spoke in Berlin of 'an emergency which endangers the reception capacity. '