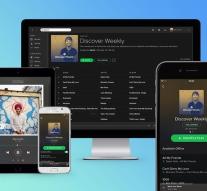 - The turnover of the global music industry is high in the lift, partly due to paid streaming services like Spotify. According to the American business bank Goldman Sachs, the total turnover of the industry in 2030 grows to over 34 billion euros a year.

The lion's share of revenue growth, estimated at 28 billion euros, comes from paid streams. The proceeds from performances and concerts will grow to over 3 billion euros a year. Goldman Sachs also expects the record companies Sony and Vivendi to increase significantly as a result of revenue growth.

In the year 2016, music sales in the United States rose to 9.5 billion euros, up 50 percent over 2015. For the first time in 20 years, the music industry showed such revenue growth. The illegal downloading and copying of records have been the marketing of music for many years.