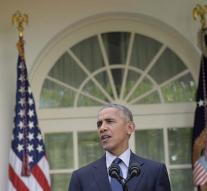 - Paris climate agreement will come into force within thirty days. This was announced by the United Nations on Wednesday. Because the European Parliament Tuesday ratified the agreement, the number of countries and greenhouse gas emissions were taken that are necessary to take effect the agreement.

The UN said Wednesday officially announced that the threshold was exceeded. The countries that have ratified it now accounts for 56.75 percent of global greenhouse gas emissions. For implementation of the treaty was 55 percent needed.

The Paris climate agreement was signed in December last year. Altogether 72 countries have now ratified it. The treaty is among other things that limiting the global temperature increase to below 2 degrees Celsius by reducing emissions.

US President Barack Obama spoke Wednesday of a 'historic day' in the fight against climate change. 'Today the world is experiencing the perfect time, and if we continue with the obligations in the agreement, history will perhaps show that this was a turning point for our planet,' said Obama.