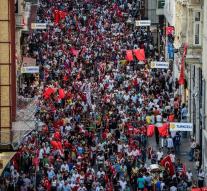 - Tens of thousands of Turks have demonstrated Sunday in Istanbul's Taksim Square 'against the coup attempt and for democracy.' The Social Democratic opposition party CHP had called for the meeting. The ruling party AKP Erdogan had since joined.

Attendees chanted prolonged the slogan 'we defend the republic and democracy.' During piece of political cohesion was widely with waved the Turkish flag and many were carried portraits of the founder of the Turkish republic, Mustapha Kemal Ataturk, the media reported. Security forces who were present at the square, did not come into action.

There were few chanted slogans that focused directly against the government of Tayyip Erdogan. The president announced Sunday that he received Monday in Ankara opposition leader Kemal Kilicdaroglu of the CHP to thank him for his support during the coup attempt. The leader of the far-right MHP, Devlet Bahceli, moves during the reception.