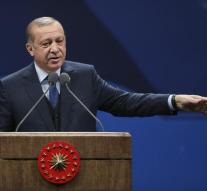 diyarbakir - The Turkish army Thursday in the southeast of the country air strikes on fighters of the outlawed Kurdistan Workers' Party (PKK), while at least eight people slain. It reported the governor of the region.

The aircraft had taken off after a military checkpoint was attacked near the border with Iraq. After a drone had determined the positions of the attackers, the fighter jets carried out the attacks. A Turkish soldier was injured.