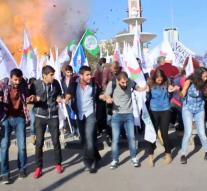 - The Turkish authorities have identified one of the two perpetrators of the suicide bombings on October 10 in Ankara to cost the lives of 102 people . It would go to Yunus Emre Alagöz from Adiyaman . Which have some state media in Turkey Monday.

The brother of the perpetrator, Seyh Abdurrahman Alagöz , in July was responsible for a similar attack in Suruc , leaving 33 people were killed.

In both cases, pro-Kurdish activists the target. The brothers stood in their place of residence known as sympathizers of Islamic State. Who is the second culprit , is still under investigation . The Turkish police is still four people trapped in connection with the attacks in Ankara , Prime Minister Ahmet Davutoglu announced Monday it.