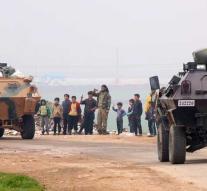 istanbul - Turkish forces have established a military observation post on Monday, south-west of Aleppo, near al-Eis. The army of the Erdogan government has penetrated deeper into Syria after an agreement with Russia and Iran on reducing the violence in the region. However, there is nothing to notice about de-escalation.

Turkey recently entered the Afrin region to prevent Kurdish YPG militias gaining too much power there. Erdogan, who is the YPG at the terrorist organization PKK, said he wanted to bring the entire border region to Manbij and further east to control.

Due to the agreement with Moscow and Tehran, the Turkish troops have now also moved further south on their way to the Idlib province. Last week, a Turkish convoy was forced to withdraw, now according to an army spokesman the advance has succeeded. There are more reconnaissance posts.

Idlib is one of the last strongholds of rebels fighting against Syrian President Bashar al-Assad, ally of the Kremlin. Russian aircraft intensified the attacks in Idlib on Sunday after the insurgents fired a Russian fighter jet. The pilot died.