Home / World / Turks are already going to the polls next summer 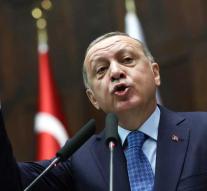 ankara - Turkish voters go to the polls more than a year earlier than planned. President Recep Tayyip Erdogan announced that premier presidential and parliamentary elections will be held on 24 June. The ballot box was actually planned for November 2019.

The AK party of Erdogan has been in power for almost 16 years and did not issue early elections. After the next ballot, the political system will change: the prime minister's post will expire and the president will receive more powers. Turkish voters voted in last year's referendum with a constitutional amendment that made this possible.