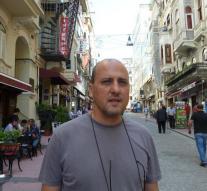 istanbul - The prominent Turkish writer and government critic Ahmet Sik was arrested Thursday in Istanbul. This has Sik himself on Twitter and reported the state news agency Anadolu.

The arrest was related to an earlier tweet, but further details were not reported. Since the coup attempt in July join the Turkish authorities harder against government critics.

The investigative journalist and writer is one of the most prominent critics of the movement of Fethullah Gülen in the United States resident cleric who is held responsible by Erdogan for the coup attempt. Sik criticized, however, the years of support for Gülen by the ruling AK Party and Erdogan himself, before it came openly to a break in 2013.

Sik said in an interview about a month after the failed coup was 'a big failure to talk about the Gülen community while concealing the contributory negligence of the AKP. 'Sik said that Gulen and Erdogan both should be brought to justice.