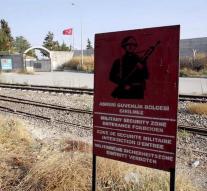 Turkish warplanes bombed several IS targets in the strategically located town. From the Turkish city Karkamış to see the other side of the border are several plumes of smoke.

The Turkish army had been shot Tuesday propositions terrorist group Islamic State, from Syria after two mortar shells were smashed in the border town Karkamış.