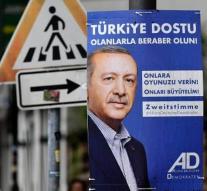 istanbul - Turkey has given its residents and countrymen in Germany a 'travel warning' for Germany. The Ministry of Foreign Affairs announced the warning on Saturday.

Turks are advised not to go to election meetings of German political parties. They must also avoid squares where meetings or demonstrations are organized or supported by 'terrorist organizations being tolerated by the German authorities. '

The warning may be a reaction to the other attitude taken by the German government since half of July against Turkey and the sharpening of travel advice for Turkey.