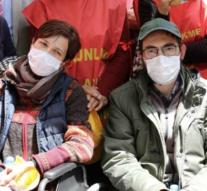 ankara - Two fired Turkish teachers put an end to a hunger strike after 324 days. Doctors were worried about the health of the duo, who lived on a diet of water, herbal tea and sugar.

University professor Nuriye Gülmen and elementary school teacher Semih Özakca protested with the action against their resignation after the failed coup. Gülmen lost about 25 kilos and recently weighed only 33.8 kilos. Her colleague also emaciated greatly: according to doctors, he went from 86 to 45 kilos.

The teachers fought their resignation in vain at a special committee. 'The committee rejected our appeal today. That's why we go to court, 'Gülmen said. 'We end our hunger strike today, but our resistance continues. '

Some 150,000 Turkish government officials were suspended or dismissed after the coup attempt in 2016. The authorities also prosecuted Gülmen and Özakca for their protest actions. The court ruled at the end of last year that Gülmen had gone on hunger strike on behalf of the forbidden group DHKP-C. She was sentenced to more than six years in prison, but was allowed to wait for her profession in freedom.