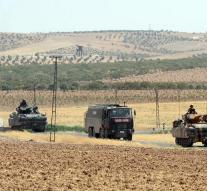 - Warriors of the Kurds affiliated militia in northern Syria provide fierce battle with Turkey-backed rebels. These are, according to the Syrian Observatory accompanied by Turkish tanks. The claims of the Syrian Democratiche Forces (SDF), which consists partly of Kurdish fighters and their allies had previously been attacked Saturday by Turkish warplanes and artillery.

The Turkey-backed rebels of the Free Syrian Army (FSA) clashed with SDF fighters near the village of Tel al-Amarna. That is near Jarablus, the border town, which the FSA Wednesday captured by Islamic State. According to the Military Council of Jarablus, which belongs to the SDF are in the attack on Tel al-Amarna civilian casualties. The council spoke of,, a dangerous escalation that threatens the fate of the region. '

Turkish tanks at Tel al-Amarna in direct combat with fighters of the Kurdish YPG militia, FSA fighters left out. The YPG denies. It would first have to make Turkish ground forces and the YPG battle.


Kurdish militias are an important part of the SDF, with the support of, inter alia, the United States, mainly to fight the terror group Islamic State. Turkey and the US, however, demand that the Kurds withdraw from the area Jarablus to the eastern or left bank of the Euphrates River.

Turkish warplanes hit earlier in the day a munitions depot just south of Jarablus, leaving more resources for the Turkish army. Fighters of the FSA, mainly Arabs and Turkmen, seized the Turkish backing to take another five villages around Jarablus.

Turkey ventured Wednesday for the first time since the beginning of the Syrian uprising by hundreds of troops and dozens of tanks on Syrian territory. Thursday Turkish troops overcame the first,, warning shots' at YPG fighters. The operation continues until the Kurds retreat, Ankara announced.