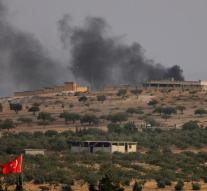 ankara - The Turkey-backed rebels of the Free Syrian Army (FSA) have the northern Syrian Jarablus captured by Islamic State. The FSA did the job, backed by Turkish tanks and commandos and Turkish and US warplanes, in a few hours.

The loss of the border town is a major blow for IS. The extremist movement now no longer has access to the Turkish border. In recent years conducted IS recruits from Turkey and goods.

The battle for Jarablus took one FSA fighter's life, the Turkish state news agency Anadolu reported. The Turkish army suffered no losses. It was the first time that the Turkish army ventured with so many men and material on Syrian territory.


The IS fighters from the city have retreated to the southern al-Bab, says the rebels.