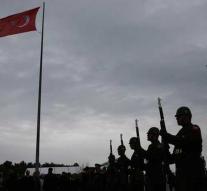 diyarbakir - In an attack not far from a military base in the southeast of Turkey, five Turkish soldiers were killed. According to sources, the attack was carried out within the Turkish security service by militants of the banned Kurdish PKK.

The incident was near the base in the Eruh district in the Siirt province. Seven soldiers were injured.